Nike: Product development from concept to customer - Reaching the consumer

Advertising is synonymous with Nike. In partnership with its advertising agency, Nike has created some of the world's most attention-grabbing advertising. You may recall some Nike television advertisements: the cinema epic of soccer players battling it out in the hull of a ship or Pete Sampras and Andre Agassi playing tennis in the streets of Manhattan. 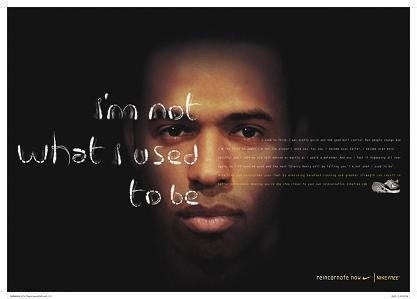 The Nike Free advertising campaign was derived from a truth about the product. As the only shoe on the market that works with the natural motion of your foot to make it stronger, it gives people the ability to become stronger, better athletes than they have ever been before. The campaign, Reincarnate, was about athletes 'leaving their old selves behind' and discovering their potential. The tennis player Maria Sharapova, the footballer Cristiano Ronaldo and Wimbledon champion Roger Federer were among the athletes used in a TV commercial to advertise Nike Free, called Power to your feet.

The advertisement which ran in Australia was different from Nike's 'blockbuster' ads; there were no spectacular crowd scenes or camera tricks. The scripts took months to write and the advertisement was heavily dependent upon dialogue. The advertisement featured ex-Arsenal player Thierry Henry. He is shown wrestling with his own inner demons and even doubting himself. His new, 'reincarnated' self wins the battle in order for him to go on to be a better athlete and he leaves his 'old self' in the past.

Nike Australia reintroducde the Reincarnation campaign via local Socceroo star, Marco Bresciano, and track athlete Craig Mottram. They brought to life how they are 'leaving their old selves behind' and reincarnating into different and better athletes. Advertising mediums included outdoor (billboards, sides of trams and buses), a DVD documentary on Craig Mottram which will be attached to the front cover of Alpha magazine and print advertising.

Nike does not rely solely on television, cinema and outdoor advertising. Nike understands that its consumers seek information online and as such it targets different online audiences around the world. The Internet has become an essential component in Nike's marketing campaign.

Nike produces a range of products which are unique to a particular sport or athletic endeavour. Nike's marketing takes into account the different needs of athletes and consumers and uses its website to communicate with these groups via in depth content, product information and athlete insights.

The Nike Free website is used to explain how the shoe was developed and the benefits of the training shoe. This interactive micro-site has three sections: 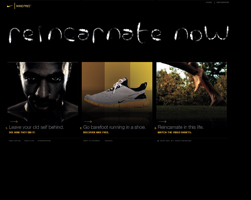 The site is lively and colourful, featuring information on the development of Nike Free, the models and technical specifications. The site challenges visitors to learn, providing them with the tools and information to decide and act for themselves. Offered in a range of languages, the site utilises a number of sportsmen and women to showcase how each person left their old self behind and worked to change themselves into a better and stronger athlete. Examples include Lance Armstrong, world-renowned cyclist who fought to return to the peak of his sport after his battle with cancer.

It is vital that Nike communicates to consumers how essential the input of its elite athletes is during product development. Nike relies on their expertise and feedback to develop the best product for athletes and, hence, the best product for consumers. These high profile coaches and athletes are then used in Nike's advertising and communications campaign because they are known by the consumer and they can help tell the product story.

Having a new and innovative product is one thing, but a company must ensure staff working in sports stores understand the product, its benefits and how it should be used. To do this, Nike created a flash-animated multi-media learning environment. Called Nike Sports Knowledge Underground (Nike SKU), it mirrors a subway rail system with each 'stop' representing a training activity where new shoes such as Nike Free are displayed. Participants are taken on a three-minute course explaining design, benefits, features and top selling points of the shoe. At the end, they take a brief quiz to ensure they know about the product and can immediately use the information in customer dealings on the shop floor. A technical specification sheet can be printed to help with customer queries. Appreciating that many sales people are young, Nike's SKU is like a video game, with information packaged in short sound bites.