The key to any marketing campaign lies in the results. The results Fujitsu planned to achieve were to increase brand awareness, build market share and achieve market leadership. So, just what did the Mark Taylor campaign achieve?

Objective - to build market share and become the market leader

Fujitsu has built market share and become the market leader since 1998, a result reflected in the Fujitsu company slogan, 'Australia's Favourite Air'. 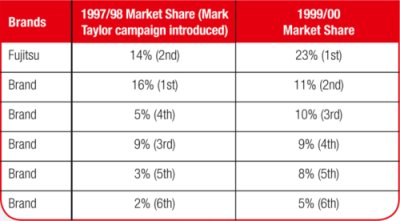 To measure brand recall, Fujitsu commissioned specialist ongoing research into consumer perceptions of the product. This research asked these questions of a sample of consumers:

The results clearly demonstrated how awareness of the Fujitsu brand changed over the period. A national figure of 32% (unprompted) brand recall and a 39% national recall of Fujitsu advertising are regarded as good evidence that consumer perception of the brand was positively influenced by Mark Taylor's endorsement.

The air conditioning market uses a specialist research firm to collect data to measure brand awareness. Fujitsu also uses this specific research study (described as an 'omnibus' study) to determine the level of Mark Taylor's acceptance in the marketplace. National data asking whether people had seen the Fujitsu advertising campaign featuring Mark Taylor, as well as whether they thought he was a good representative for Fujitsu were collected. This was then compared with similar data gathered in the Sydney market in 1999 and 2000.

The results were impressive for Fujitsu. 75% of men and 68% of women reported that Mark Taylor was a good representative for the company.

In an effort to further enhance its brand awareness, Fujitsu entered into a motorsport sponsorship arrangement. There were a number of sponsorship avenues explored, but ultimately V8 Supercar racing was decided as the best medium to achieve this. It offered a truly national platform to promote the Fujitsu brand name over an extended season when compared to more traditional avenues such as football, cricket, etc. The sponsorship initially started with a privateer in the V8 Development Series and has evolved into the creation of the 'Fujitsu Racing' team, competing in both the main V8 Supercar Championship and the V8 Development Series.

This sponsorship serves a dual purpose for Fujitsu - brand exposure to a very wide consumer demographic and the ability to develop much closer customer relationships through on-track experiences and corporate hospitality at the various race meets around Australia. The Fujitsu Racing truck, V8 Supercars and promotional road car are all utilised for various store based promotions throughout the year, aimed at bringing further impact to customers localised advertising activities.

Fujitsu, like most other air conditioning suppliers, was traditionally affected by a considerable drop in sales at the completion of summer and throughout the winter months. Whilst its specialist air conditioning customers continued to focus on sales on a year round basis, its retailers tended to treat the product as purely a cooling product for summer, ignoring the benefits of reverse cycle air conditioners as viable heating alternative to traditional sources.

In an effort to change this mentality and bring greater consistency to its sales across the entire year, 12 years ago Fujitsu became the first supplier to introduce a winter consumer cashback incentive scheme. A $150 consumer installation bonus was offered by redemption for consumers who purchased and installed a reverse cycle split system air conditioner in the designated period. This promotion was heavily promoted with advertising and point of sales material featuring Mark Taylor. This initiative proved hugely successful for Fujitsu with an increase in sales of over 40% compared with the same period the prior year.