Telstra is one of only a few telecommunications companies in Australia that has the ability to provide customers with an integrated telecommunications experience using its own assets and content services such as Sensis® and BigPond®.

Telstra's strategy is to create an easy to use, simple and intuitive solution that provides a real advantage and cost benefit to individuals, businesses, enterprises and government. It aims to do this by integrating the assets that Telstra owns and sharing content across home phones, mobiles, Internet and cable TV.

This is achieved by offering five core products: 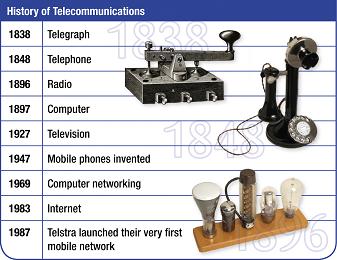 Back in 1901, the Australian Government established the Postmaster General’s Department (PMG) to manage the country's telephone, telegraph and postal services. PMG is now known as Telstra and has gone through a number of transformations since its origins: